Three months ago we bought our second car, this time from Suzuki Shaw in Mandaluyong City. You may ask why we have chosen this dealership, the answer as follows:

1. We have a friend from this dealership
2. We expected that we will be given best service
3. The new model of Suzuki Celerio was good enough to impress us

But our buying experience turned out to be not good because we did not get what we expected. And we have resorted to demand letters and formal complaint. Well, I will not talk about the details as we have already entered to a compromise agreement but I would like to share the LESSONS that we learned from our bad experience.

First, NEVER GIVE YOUR 100% TRUST to your sales agent. Even though the agent is your friend, reserve some of your trust. Some people will do whatever it takes to sell even for the sake of friendship.

Second, SCOUT AND LOOK FOR OTHER DEALERSHIP. Compare their customer service standard. Compare their freebies being offered. Get other options. There are so many dealers that will offer better deals just to sell.

Third, INSPECT THE UNIT THOROUGHLY. Check everything, from the outside to the inside of the unit. Check the engine, tires, windows, steering wheel, transmission and dashboard. Most especially check the ODOMETER. It should be from 5kms to 15kms. Beyond this mileage, refuse to accept the unit.

Fourth, BEST TO BRING A TRUSTED MECHANIC to check on the unit. You won't get wrong with a third party checking on your prospect car.

I hope you will learn from our lessons. Better to be sure before buying than complain afterwards. 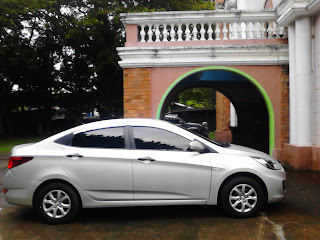 Our Hyundai Accent car parked infront of the church before the Holy Mass. 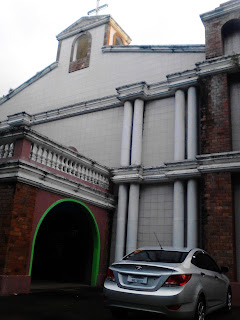 As we working and living in Quezon City, the car was left in the house of my in-laws.

In my next post, I will feature our Hyundai Eon.

Happy Friday everyone! Live life to the fullest! 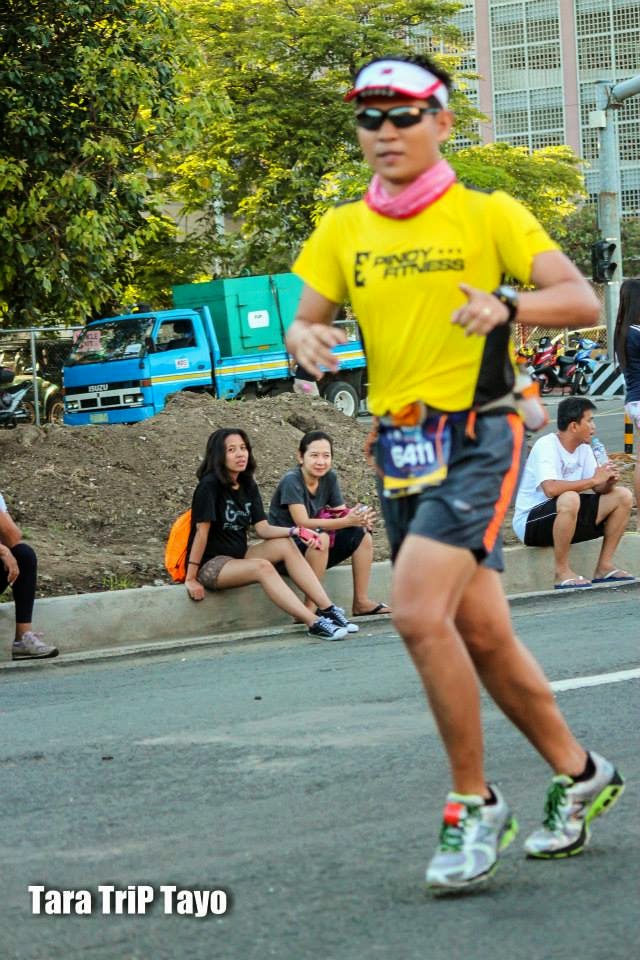 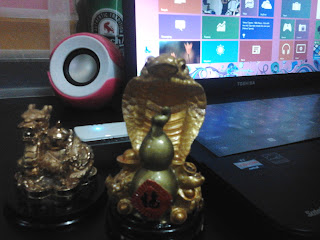 Let me greet everyone a very good morning of the first day of the year 2013! It is been a long while since my last post here. I was more on updating my running blog Runners Toe for the past months, but hopefully I can get back also in this blog.

So it is year of the snake for 2013, and we already have our snake lucky charm. For the past three years, we have been getting our yearly charms.

How about you? Believing in charms does not mean that when you have it you just sit and wait until the blessings will come. It is the other way around, you still need to work hard for everything you wanted in life!

Our vacation in Puerto Princesa, Palawan last July 27-19, 2012 won't be complete without a great place to stay. And we made a good choice for choosing Casitas de Az Pension.

Aside from being accessible to the heart of Puerto Princesa City Proper, Casitas de Az Pension is just within reach of major establishments such as the Badjao Seafront Resto, the Immaculate Concepcion Catheral, NCCC Palawan (the first mall in the Province), ABS CBN Palawan among others.


Their room accommodations are comparably affordable to other hotels or pension houses in Palawan, besides their facilities are just new and with modern designs. An additional building is being constructed nearby the existing pension house.

We stayed at the Casitas de Az Pension for 3 days and 2 nights, and we love the hospitality of the staff especially that we were not charged of penalty even though we only able to check out after 2PM during our last day in Palawan (we were stranded at Badjao Seafront due to heavy rains and strong winds).

Thank you to Casitas de Az Pension for the great accommodation!

For more info about Casitas de Az, please click the link above.

Friday, July 27, 2012 - After waiting for more than 30 minutes at the loading bay near the mouth of the Puerto Princesa Underground River, it was our turn to tour the river. As we have been informed, the tour of the allowable 1km plus part (regular tour permit) of the river takes at least 45 minutes.

As our boatman, Coco slowly tour as inside the underground river. He cheerfully gave us information about the different stalagmites and stalactites found inside the river. These natural formations create different forms and with a broad human imagination, you can think different animals and plants to correlate with the formations.

The underground river was the home of thousands of bats and the very well known balinsasayaw, the bird that make their nest from their saliva, which the locals collect which is the main ingredient of the bird's nest soup.

Along our way back to the mouth of the underground river, while taking photos of the stalactites, I luckily got a good photo of a flying balinsasayaw bird (at the above photo).

The PPUR was at least 8 kilometers long but regular visitors are only allowed to tour up to 1.5 kilometers. While those who have special permits can go as far as 4 kilometers deep inside the underground river.

Recently, the Puerto Princesa Underground River (PPUR) was named as one of the new 7 Wonders of Nature. This has made the spot attract more tourists, local and foreign alike.

It was indeed a breath taking tour. Our first time to visit PPUR and it was very memorable journey through million of years, how nature do it works at its best!

Last July 27-29, 2012, wifey and I had our yearly vacation and this time with my mother-in-law, brother-in-law and his girlfriend. Our destination is Puerto Princesa, Palawan.

As I am not allowed to be absent from work a long time, we had our vacation itinerary fully loaded. Our flight from Manila was scheduled last July 27 at 5:40 AM.
Upon arrival at the airport at around 7AM, we were fetched by the free airport transfer service offered by the Pension where we planned to stay. Immediately after getting our room, we hurriedly boarded our waiting rented van to Sabang Port, where we will board motorized "bangka" to the underground river.

Due to being in a hurry, we forgot to change clothes and dress up for island and water adventure. With this, I guess we are the time first time tourist at the Underground River wearing jeans and rubber shoes :-)

From Puerto Princesa City proper, the land travel to Sabang Port was around 2 hours. The road was a mix of concrete and asphalt in some areas, with also parts with a lot of pot holes due to the previous rains. The journey to Sabang was a long winding road along the mountains and a typical countryside scenery with a few houses and establishments.

At around past 9AM, we arrived at the Sabang Port, where we paid Environmental Fee of 40 pesos each and rented a motorized bangka for 700 pesos (max of 6 passengers).

The bangka trip to the Underground River  landing bay was around 30 minutes. Along the way, we were fascinated by the beautiful rocks formations and green mountains along the coastal area.

Before entering the Puerto Princesa Underground River Park, we were again required to register and to present our tour permit. Then we proceeded to the second loading bay going inside the river.

The boats going inside the underground river was not motorized, so we have to wait for our turn. While waiting we had time to took pictures at the tour loading bay.

PLDT myDSL and Nuffnang bring you The Avengers!

With the fast pace of life and living nowadays, everyone is in a hurry, you need to be speedy and fast! Just like having a fast internet connection courtesy of PLDT myDSL!
With PLDT myDSL fast internet connection, I love to surf the net all day and all night long, update my Facebook and upload photos, watch movies and videos at YouTube, search information through Google, map and monitor my weekly runs through Dailymile, play my long time online game, and of course write blogs! And so much more!
And everyone can experience the fast internet connection by PLDT myDSL with their newest PROMO which will be happening on April 27-29, 2012, the so-called Great Payday Sale!

The mechanics of the Great Payday Sale are as follows:


1. This summer is the perfect time to enjoy the strongest connections at home with PLDT myDSL’s Great Payday Sale happening on April 27-29, 2012.
2. All they have to do is register at the nearest PLDT Home booth or malls nationwide on April 27-29, 2012 with 1 valid ID, no cash out!
3. They can upgrade their Internet with PLDT myDSL’s biggest Internet sale ever.
4. Freebies like a WiFi+Modem with free installation and 1 month DSL will be given away. That’s as much as P5,000 savings!
5. They can also apply online at www.pldtmydsl.com


Thank you to Nuffnang and PLDT myDSL for making this contest possible!

Rod
Manila, Philippines
Inspired by Life, Driven by Love, Boosted by Faith -- Join me as we journey towards the marvels of living.

Our Daily Bread - Source of Life

Add Snippets to your site

Drop Me A Message